Claudette not only writes lyrics and music for herself, but also writes and co-writes with other professional writers, putting music to lyrics and also acts as a Producer and/or Sound Engineer for many more helping create anything from a demo to a professional CD.
In her early years, Claudette co-wrote songs with local rock band Freedom Fighter, who enjoyed much success during the late 70’s early 80’s, releasing two albums, an EP and two singles, with performances at venues all along the South Coast as well as radio and TV slots. 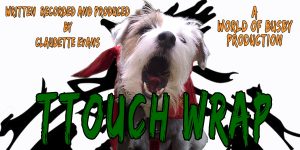 Along with the many stories Claudette has written regarding the adventures of Busby, she has also written several songs concerning this cheeky little Parson Russell Terrier to listen to these and enjoy the accompanying videos the visit the dedicated web page at World of Busby all created by Claudette. Many of which deal with doggy issues.

Artists Claudette has or is in the process of co-writing or producing music and recording poetry John Hobbs, a talented published poet/lyrist from Dorchester, take a listen to his Poems and Songs.
David Genese, a local singer/guitarist songwriter, records his own compositions using Claudette’s orchestrations check out ‘Ask Charlie’ on Broadjam.com.
Barry FitzGerald is in the process of recording a suite of music which is being engineered and co-produced by Claudette.
Alan Morgan, from the Sundowners uses Claudette to arrange and record his original compositions as well as re-mastering his band’s original recordings from the 1970’s.