Putting pen to paper is exactly what I’ve been doing all my life, be it writing songs or stories, and I would like to thank Awen Cultural Trust and Bridgend County Borough Council for their support of these podcasts. 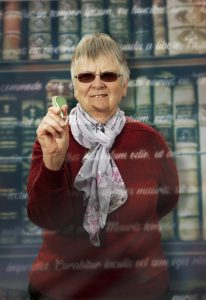 Episode 1 contains music from Freedom Fighter and my own Comedy Act; influences that have shaped my writing and how by joining various writing groups helped me grow as a story teller. I share via a story and a poem a couple of my earliest memories, ‘The Perambulator’ and ‘Visiting Grandma’. These are followed by a short story ‘Strangers on a Train’ and finishing with a Haiku Poem.

In my first podcast, I briefly mentioned my involvement with Freedom Fighter, a rock band comprising of six young men, all of whom suffered from Muscular Dystrophy. In my second podcast I’m going to start with a song we opened every set with, as it reflects, the dreams and inspirations of many young people, that of becoming a Rockstar!
Then I’m going to pay tribute to a  lady who writes the most amazing poetry, as well as penning some brilliant short stories. A member of both the Bridgend U3A writing group and Bridgend Writer’s Circle, nonagenarian, Jean Harding.
I’m concluding this episode with my science fiction story ‘Adamstown’, the winning short story in their Railton Competition.

In this 3rd episode I’m looking at how inspirations for our writings are shaped by emotions and the influences loyalty, birth, location, and pride of a nation play in our putting pen to paper.
There’s a song ‘Man’s Best Friend’ and two takes on ‘Welshness’, then some poems by  a member of Bridgend Writer’s Circle, Aberkenfig’s own Kevin Bryant, ending with two more writings from members of Porthcawl’s U3A.

Song titles and included lines and phrases are often the starting point for popular fiction and in episode 4, I’m going to be exploring the connections between stories, poetry and song lyrics. And have you thought by using a song title for a ‘prompt’, you would never be lost getting the creative juices flowing!
There’s a song I demoed for Dorset poet John Hobbs entitled ‘In 2 Today’ and I’ll be reading article I wrote on Bob Dylan inspired by a Bridgend U3A Writer’s Group prompt and another story, inspired by a real golden oldie, George Formby’s ‘With My Little Stick of Blackpool Rock’, my entry from Bridgend Writers Circle’s Railton Competition back in 2016, followed by Bridie Banwell’s monologue entitled ‘The Gallery’.
I’ll close with an extract from a song I wrote which is all about the experience my dog Busby had when performing for Britain’s’ Got Talent.

In episode 5 I’m exploring how song titles or lyrics can be used to create a story. Next time I’ll be looking at more writings with a musical theme, and once again, thanks to Awen Cultural Trust and Bridgend County Borough Council for their support of this podcast. For further information regarding Bridgend Writers Circle, go to bridgendwriters.org. So, until the next time, put Pen to Paper and get writing!

Episode 6 features the winning entries of Bridgend Writers Circle’s Saviker Shield and the winning entry of the Keith Cole Poetry Competition. So, finally thanks to Awen Cultural Trust and Bridgend County Borough Council for their support of this podcast. For further information regarding Bridgend Writers Circle, go to bridgendwriters.org. So, until the next time, put Pen to Paper and get writing!

Next month will be a Halloween Special….