Moving headlong into the new technology and a chance meeting led to partnership with Anthony Davidson, a Musical Director and Arranger from Jersey, they produced Theatre tapes for Song and Dance Productions of Jersey for a Follies Show at the newly opened BIC. They were invited to do another Show the following year and then the Show moved to the Pier Theatre for a Season with similar Shows running at Swansons in St Helier, Jersey. This is an edited version of the Opening medley from ‘Les Follies’.

These Shows were very popular, so Claudette and Tony formed STAR Services to provide custom made backing tracks for Cabaret Acts as well as arranging and recording original music for songwriters and writing and arranging music for lyricists.
In the late ’80 the pair were asked to perform live for the southern heats of a National Talent Show, ‘Star Trail’. This brought many new challenges with Tony on Keyboards and Claudette on Drums and accompanying a mixed variety of Acts including Comedians, Vocalists, Instrumentalists and Speciality Acts of all ages and genres, touring the Show along the South Coast.
As recording moved into digital and home recording became more of an option, Claudette decided to downsize and relocated to Westbourne and move into digital recording to specialize in tuition, recording and editing. This also saw her return to live performing firstly in a duo ‘Back to Back’ with Robert Hockham on keyboards before returning to her roots as a solo entertainer playing keyboards and singing. One of these ‘gigs’ was at the Midland Hotel, a leading coaching Hotel in Bournemouth and in 1992 she was asked to take over the job of Director of Entertainment. Read more……..
Many of Claudette’s past students have gone on to enjoy success in the music industry. One of her ex-guitar students has a MA in Sound Technology and another is a Professor of Music at Southampton University and many past vocal students have gone on to work in Chart topping Bands, the West End, Cruise Liners and the like.
One of her Keyboard/Vocal Students, Fraser Bennett is now a superbly talented and well respected Music Producer working with many headline Artists, one being the winners of Britain’s Got Talent, the street dance troupe Diversity, as well as writing original material for many Street Dancers and TV Companies. Take a look at his website fraserfreeze.com 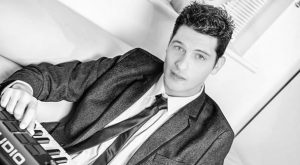 The Studio at Westbourne may have been small but many local artists recorded their first demos there or co-wrote their first songs with Claudette, including John Hobbs.
A very talented lyricist and songwriter John produced quite a body of songs with his co-writer and producer Claudette, and you can listen to some of their collaborations by clicking this link.
Another artist who recorded his first demos with Claudette is Mischa Weston-Green, who has since gone on to form Misca’s Merry Men, a dynamic and inspiring collective of musicians who infuse an array of genres culminating in a melting pot of sax, strings, drums & keys, delivering an energetic and compelling performance with their uplifting, socially charged originals taking you on an exciting voyage laced with messages of peace, love & unity… the revolution starts here!
Retiring from teaching and moving to South Wales in 2015, Claudette continues to use her production skills in collaboration with Awen Trust and BCBC in a joint venture Stronger Together Bridgend.