Having enjoyed returning to live performance, touring with David Lever’s ‘Search For a Star’ with Tony Davidson and MD and Claudette on drums, she decided to try her luck as a solo performer, singing and playing keyboards including her comedy routine ‘Dorset Maid’ featuring the musical saw. Then followed several years of gigging in and around the Bournemouth area until in 1993 she was offered the opportunity to take over as MD at the Midland, Bournemouth’s largest coaching hotel.
Responsible for organising the entertainment programme, bookings Acts and writing and producing three Shows a week, during her 10 year stay at the Midland Hotel Claudette helped and encouraged young singers and dancers to develop their skills through live performance. 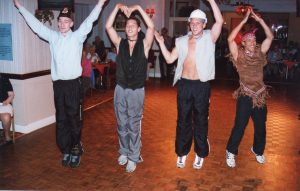 Funked Up, (seen above) was one of the many young Arts that blossomed at the Midland Hotel and went on to win the 2001 Star Trail

One of the most popular acts was La Belle Sophisticate aka Simon Phillips, who had to perform many quick changes from Dame to Man in two weekly Shows along with the Christmas Pantomimes assisted originally by the wonderfully talented Stephanie Dean, who sadly lost her life in a tragic car accident. 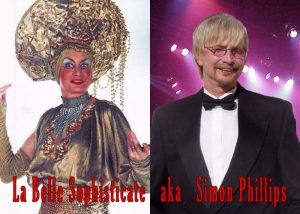 Here he is with Stephanie Dean and Claudette Evans in their highly successful Show ‘Back in the Old Routine’.

Another popular duo with their Rock’n’Roll Show was Mike Isaacs and Samantha Ryan. During her time at the Midland Hotel,  Claudette also developed her comedy skills which involved playing the Musical Saw, a real crowd pleaser.
Watch this video of Claudette attempting to teach a guest to play the Musical Saw.

Another successful Artist who was a regular at the Midland Hotel was Jason Mills performing a tribute to the ‘Rat Pack’ and with Claudette’s help appeared on Stars in Their Eyes as Frank Sinatra.

This resulted in his being offered a Summer Season in Jersey. Following the demise of the Midland, Claudette returned to teaching and recording full time, eventually retiring to Wales in 2015 to pursue her love of writing.