As far back as Claudette can remember she enjoyed writing stories, drawing, painting and  singing, and as soon as she was old enough, her parents acquired a piano – this opened the door to a new passion, writing songs.
Claudette’s mother wanted her to pursue a  career in nursing! However, being a teenager in the late 60’s Claudette had other ideas! She wanted to play guitar and write songs and though a chance meeting, her path in the world of music was set, learning her trade via a dance band, rock group to eventually becoming a solo entertainer. 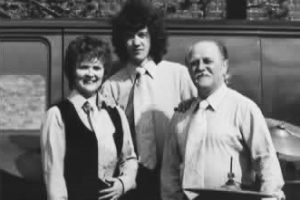 In the 70’s/80’s Claudette was very much part of the Bournemouth music scene, having opened a Recording and Tuition Studio and considers herself fortunate to have be involved in the forming of Freedom Fighter, seven guys, all of whom suffered from Muscular Dystrophy. This chance meeting led to the recording of two singles, an EP, two Albums, performances in London and venues all along the South Coast as well as many radio and TV appearances. To read more about Freedom Fighter Click here

In the late 80’s in association with the local radio station, Claudette organised ‘Band Bash’, a Talent Show for new and exciting local groups. To read more and listen to some of the recordings click here
Moving headlong into the new technology, a chance meeting led to partnership with Anthony Davidson, leading to a partnership producing Theatre tapes, custom made backing tracks for Cabaret Acts, arranging and recording original music for songwriters and writing and arranging music for lyricists. To read more about STAR Services click here.
This also saw her return to live performing firstly in a duo ‘Back to Back’ before returning to her roots as a solo entertainer playing keyboards and singing. One of these ‘gigs’ was at the Midland Hotel, a leading coaching Hotel in Bournemouth and in 1992 she became Director of Entertainment. For more on the Artists and Shows click here.
Following the demise of the Midland, Claudette returned to teaching and recording full time, but performing was never far away. In 2009 Claudette was invited to audition with her very talented Parson Russell Terrier, Busby, for ‘Britain’s Got Talent’ and in January 2010  the pair appeared on stage in front of Simon Cowell, Amanda Holden and Piers Morgan and a capacity audience at the Millennium Centre. 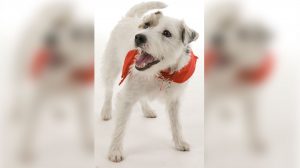 This resulted in her writing many songs and stories about the adventures she enjoyed with Busby. To read more about his life and adventures please visit his dedicated website: www.worldofbusby.com
Claudette retired from teaching to concentrate on her writings, artwork and recording her own songs and soon became involved with local writing groups. To read more click here.
Claudette has also been using her skills to record and make videos of writings from members of Bridgend Writers Circle – all available on their YouTube channel.
Going into 2020 and Lockdown, Claudette was invited to work alongside a local collaboration between BCBC and Awen Trust called Stronger Together Bridgend assisting with editing audio and making videos pertaining to all things creative and this has led to her hosting a monthly podcast entitled ‘Pen to Paper’.